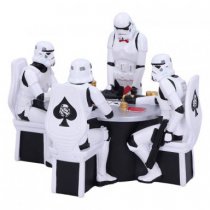 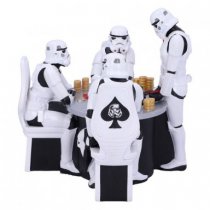 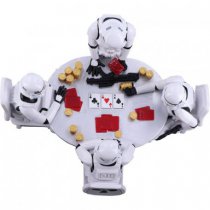 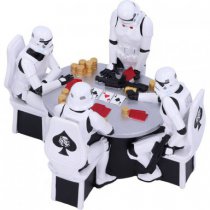 Type : Diorama
Character(s) : Stormtroopers
Size : 18 cm.
Serie : Star Wars
Serie nr. : NEMN-B5441T1
Age : 3+
Year : 2021
Bringing out their quirky charms, Nemesis Now has developed this brilliantly executed Stormtrooper scene. Cast in high-quality polyresin before being expertly hand-painted, this figurine shows three Stormtroopers sat around a poker table while one stands in as croupier (note the red bow tie). Based on the original moulds that Andrew Ainsworth of Shepperton Design Studios produced, the Stormtroopers to the left and opposite the Croupier are invested in his every move, while the Stormtrooper to his right is looking away, holding his E11 Blaster at his side. He waits patiently, will the cards fall in his favour?
When you look closely at this piece you will notice a slight asymmetry to the helmet, this is to replicate the imperfections which were apparent on the original mould of the first Stormtrooper.