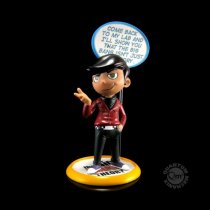 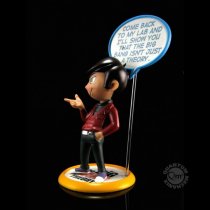 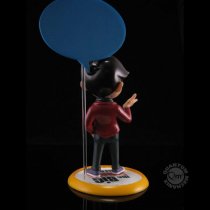 Type : Action Figures
Character(s) : Howard Wolowitz
Height : 9 cm.
Serie : The Big Bang Theory
Serie nr. : BBT-0103
Year : 2018
Howard Wolowitz is the product of an overbearing Jewish mother who still treats him like a child. Unlike his nerd buddies, he lacks a PhD, although he holds a master´s degree in engineering from MIT. He fancies himself a ladies´ man, but can´t see how his creepy overtures send the fairer sex running the other way.
From the hit TV series The Big Bang Theory, Howard redeems himself in his marriage to spitfire Bernadette and in his bromance with pal Raj Koothrappali. His work has been seminal, including his toilet design for the International Space Station. And don´t forget that Howie also speaks English, French, Mandarin, Russian, Arabic and Farsi and Klingon.
Designer Mohammad ´Hawk´ Haque has captured Howard, complete with skinny jeans, turtleneck and that familiar mop of hair. Our Q-Pop™ figure stands about 3.5 inches tall and is made of PVC. As with all our Q-Pop figures, Howard comes with a word bubble and special marker, so that you can add quotes.